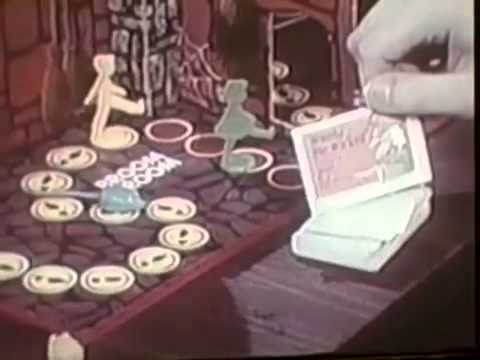 It’s Halloween, making it a perfect time to take a look at one of my all-time favourite classic board games with a spooky theme – Which Witch? Designed by Marvin Glass & Associates and distributed in North America by Milton Bradley, Which Witch? originally appeared in 1970. The initial release was a large box version with an unfolded board. This was later followed up with a narrow box edition in 1971, with a folding board.

One of the most appealing features of the game is the three-dimensional game board. Really, setting up the haunted house used in the game is half the fun! The playing surface consists of four large rooms: the Spell Cell, the Bat’s Ballroom, the Broom Room, and the Witchin Kitchen. A large chimney in the center of the board completes the structure.

The objective of the game is to be the first player to make it through the house (aka the “Witch Works”) and escape by reaching the “Charmed Circle”, located at the top of the stairs in the Bat’s Ballroom. Like any good haunted house worth its salt, there are plenty of obstacles to overcome along the way.

Players move their pawns around the board and from room to room through the roll of a die. After each roll, a card is drawn that causes one of the three witches that live in the house (Ghoulish Gertie, Wanda the Wicked and Glenda the Good) to appear with instructions on what to do next. Drawing a Wanda the Wicked card casts a spell over the player’s pawn, turning it into a mouse. In addition to replacing the playing piece with a mouse of the same colour, the player remains frozen in place on the board until a Glenda the Good card is drawn in a subsequent turn. True to her name, Glenda reverses the spell, returns the player to human form, and allows them to continue to move through the house.

Things really get interesting if you draw a Ghoulish Gertie card. Gertie requires the player to drop the metal “whammy ball” down the chimney stack. Once inside, the ball is “magically” channeled into one of the four rooms below. Each room contains a trap that is activated when the ball enters – loose floorboards, a swing broom, a moving wall panel and a slippery stairway.

Any playing pieces located on “Danger” spaces when the ball enters are forced to return to the blue “X” space at the entrance of the room – a significant blow to the prospects of winning the game.