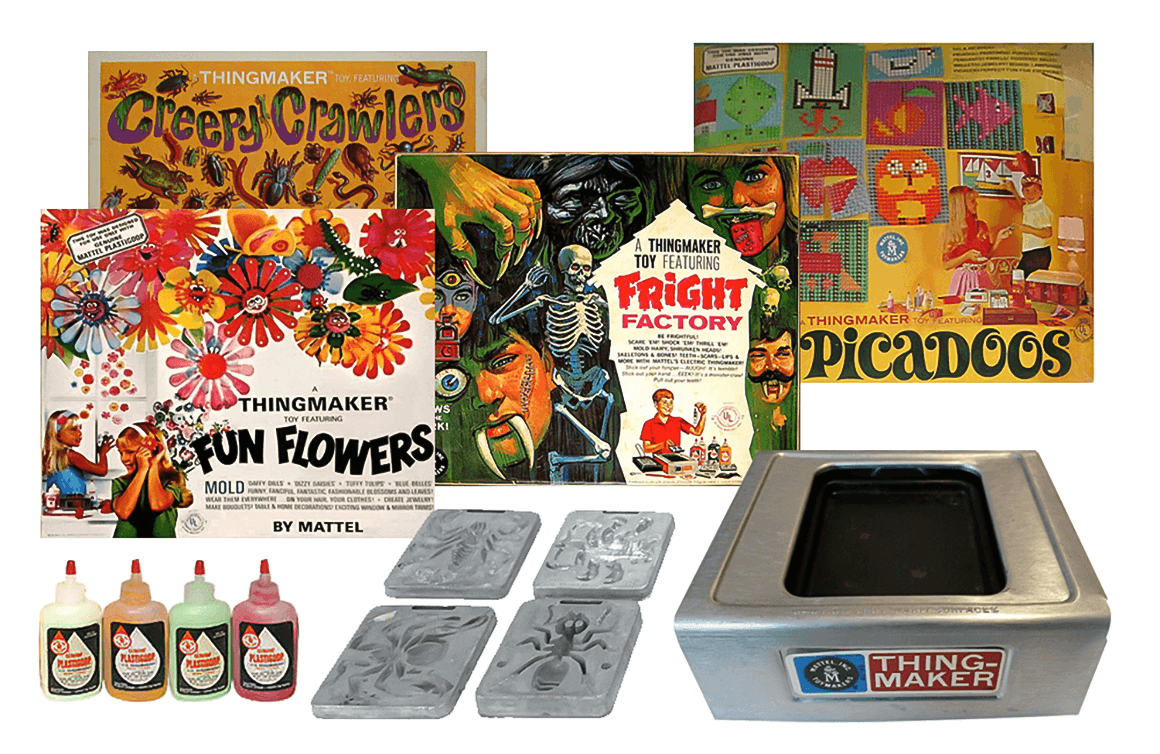 Mattel released more than 15 different sets for the Thingmaker, using themes designed to appeal to both boys and girls.

Low-volume manufacturing made the 1964 release of the Thingmaker from Mattel possible. The entire Thingmaker product line was an offshoot of the company’s Vac-U-Form machine, a miniature vacuum forming toy released the previous year.

The heart of the Thingmaker system was a hot plate with an internal heating element that reached approximately 400-degrees Fahrenheit. Children squirted a proprietary liquid chemical, called Plasti-Goop, into various die-cast metal moulds. Plasti-Goop was stored in hand-held bottles and came in multiple colours.

Once filled with Plasti-Goop, moulds were placed on the Thingmaker heating tray. As these heated, the soft plastic in the Plasti-Goop would cure, change colour, and become firm and glossy. Once the transformation had occurred, the mould was placed in a cooling tray filled with cold water, which caused the Goop to harden so the creation could be removed using the provided prying tool.

The initial release of Thingmaker from Mattel was called Creepy Crawlers and contained 30 different moulds and four bottles of Plasti-Goop. Of course, The Thingmaker’s poured plastic functionality wasn’t limited to “twitchy, twertchy, wriggly things.” Mattel released a multitude of sets, based on various themes, designed to appeal to both girls and boys. Some of the most popular were Creeple People, Fighting Men, and Fun Flowers.

In the 1970s, increased child protection and toy safety regulations made it difficult for Mattel to continue selling a toy that became extremely hot and utilized non-toxic fluid that gave off fumes while it was heated. By 1973, Thingmaker disappeared from toy shelves.

In 1978, Mattel released Thingmaker II, which employed a more safety-conscious approach. The metal moulds were replaced by plastic equivalents and the open-faced hot plate was redesigned into a more enclosed system that heated bottles of re-formulated Plasti-Goop internally. Unfortunately, Thingmaker II wasn’t a big hit with kids and quickly ran its course on store shelves.

Since the demise of Thingmaker II, two companies have attempted to revive it for a new generation of fans and their nostalgic parents. New York-based Toymax got in the act with Creepy Crawlers Magic Maker in 1992, complete with an Easy-Bake Oven-esque warming oven, metal moulds, and the original formula for Plasti-Goop.

After Jakks Pacific acquired Toymax in 2002, it continued to release creepy crawlers while adding more licensed brands to the portfolio, including Pokémon and Hello Kitty.

In 2016, Mattel attempted to re-take the ThingMaker throne with a new version of the product using a different manufacturing technology: 3D printing. Despite all the hoopla, however, the product never advanced beyond the testing phase and the company announced its cancellation in 2019.