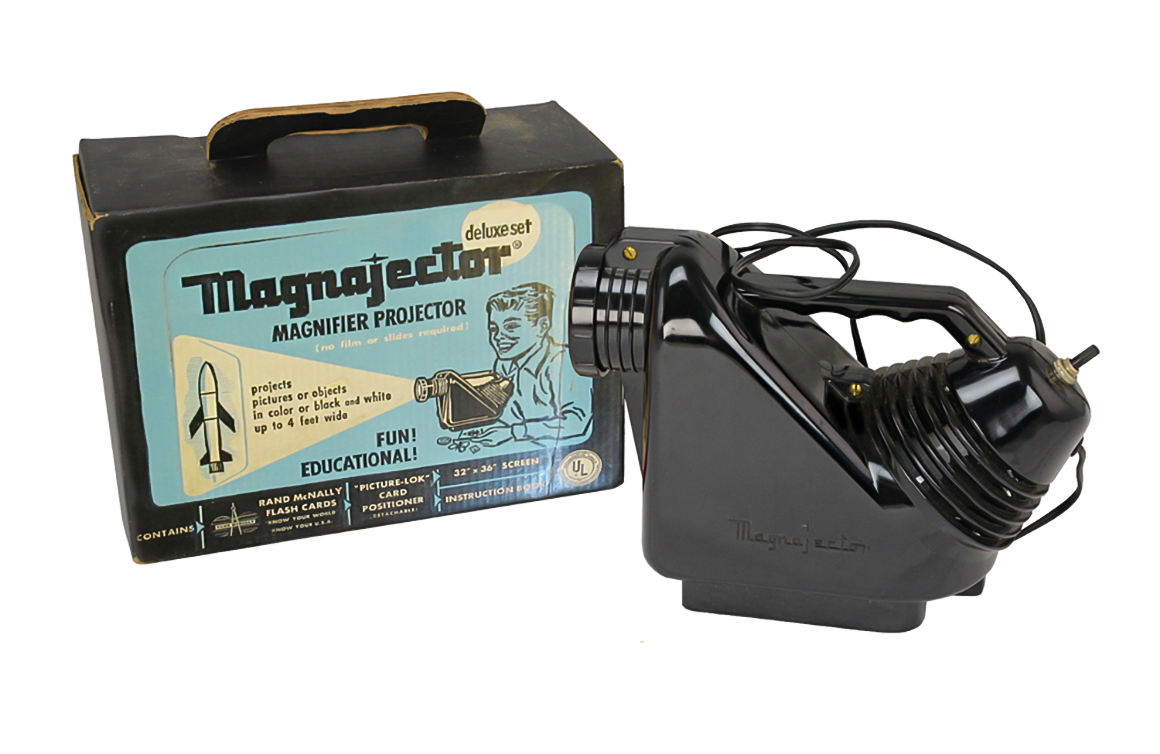 Released in the late 1950s by Rainbow Crafts, the Magnajector was a kid-friendly opaque projector. Such devices used a combination of lighting and mirrors to reflect on a wall or screen a magnified image. Typically, these toys came were used to project a variety of illustrated materials, including photos, magazines, and comic panels. Opaque projectors are often referred to as a modern successor to Magic Lanterns, one of the earliest forms of slide projectors invented in the 1600s.

Rainbow Crafts was best known as the original inventors and distributors of Play-Doh, and the toy projector was the company’s first foray outside of its iconic molding compound. Rainbow Crafts marketed the Magnajector as an educational toy for classroom use, a drawing/tracing aid, and even as an entertainment device for “shut-ins.” The toy was constructed of black plastic and weighed a scant 28-ounces, making it very portable.

The Magnajector functioned with a 60-Watt incandescent light bulb and a mirror placed at a 45-degree angle to enlarge black and white or colour illustrations placed in its aperture to approximately a four-foot width. Use required a flat surface and standard electrical outlet for its long power cord.

Following the toy’s initial popularity, Rainbow Crafts released a Deluxe Set, which included a set of post-card sized flashcards and illustrations from travel company, Rand McNally; a 32-inch x 36-inch screen; and, a “Picture-Lok” card positioner that ensured proper placement of objects under the projector.

The VertiBird line of toy helicopters combined simple flight simulation with crime fighting, search and rescue, and space exploration operations – an exceptional play experience for children who wanted to create their own adventures.