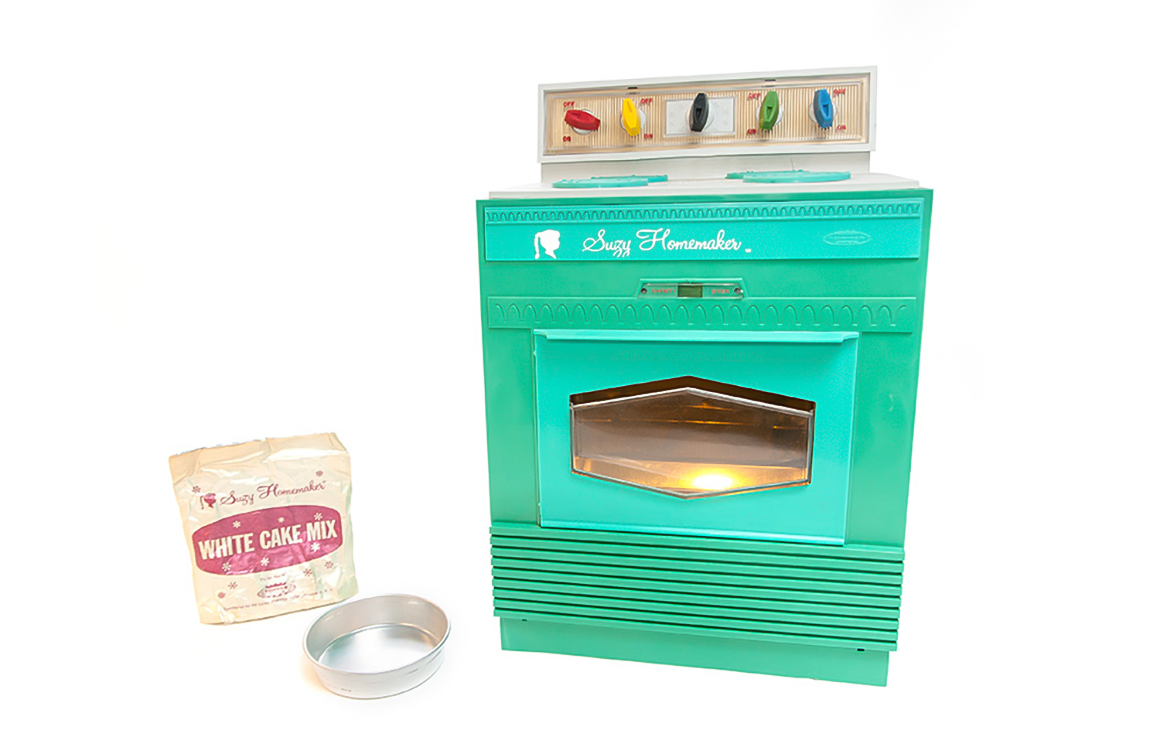 Ads for the Suzy Homemaker toy line offer a glimpse at life in the 1960s, promoting the brand as something that would allow “little girls to learn homemaking skills with appliances so big, so safe, so real.”

In 1966, Topper Toys introduced the Suzy Homemaker line of toy appliances. The line included kid-sized working versions of various household conveniences of the day, including a washer-dryer, iron and ironing board, vacuum cleaner, and mini oven. In subsequent years, the company released even more Suzy Homemaker appliances, including a blender, grill, high-speed mixer, and dishwasher-sink.

Initially, the entire line had a distinct aqua green and white color scheme and each appliance was emblazoned with a Suzy Homemaker logo. In 1971, Topper added an assortment of additional color options: apple green, sunshine yellow, and pow pink.

One of the more popular appliances, the Suzy Homemaker Super Safety Oven, was the company’s answer to Kenner’s Easy-Bake Oven. The Super Safety Oven was big, standing a whopping 17-inches tall, 12-inches wide, and 10-inches deep. It used two 100-watt incandescent light bulbs for heat and featured a pull-down oven door that would automatically lock while the oven was in use – opening only when the temperature returned to a safe level – and a stovetop that could be used to warm food.

Each oven included a baking pan, spoon, bowl, and two packages of mix and icing. The toy’s size allowed kids to bake cakes that were much larger than other toy ovens at the time. The pan included with the Super Safety Oven measured 5-inches in diameter and over 1-inch deep, allowing Topper to play up the oven’s ability to bake a cake that served six.

Rather than forcing your friends to endure an impromptu slideshow from your family road trip to the Grand Canyon, you could instead regale them with selections from your library of standard View-Master picture reels.

Designed by Marvin Glass & Associates and released in 1967 by Ideal, Careful The Toppling Tower Game is a game that requires “steady nerves and steady hands” to win.