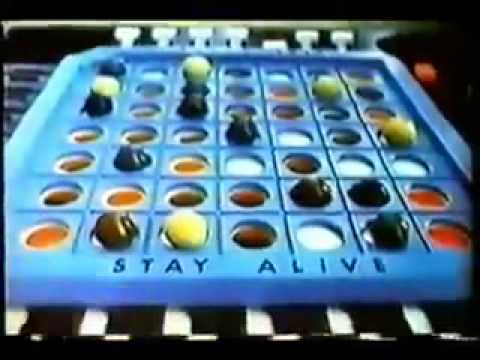 Released in 1971 by Milton Bradley, Stay Alive is one of those strategy games whose name accurately sums up its overall objective. The game was also referred to as “The Ultimate Survival Game” in television and print advertising, emphasizing its last-player-standing objective.

The playing surface consists of a 7×7 game board containing a series of 14 sliders (7 orange and 7 white). Each slider has a fixed number of holes by which it may be moved into one of three positions (top, center, bottom) using knobs at either end.

To start a game, 2 to 4 players randomly adjust the sliders and each take turns placing 5 colored marbles onto the non-holed spaces. After all the marbles are placed, game play begins. Each player changes a slider’s position in an attempt to eliminate an opponent’s marble by causing it to fall through one of the newly opened holes in the game board.

The winner is the last player with marbles remaining on the board.

After Milton Bradley discontinued Stay Alive in the late 1970s, the game enjoyed a brief resurgence in the mid-2000s, when Winning Moves Games USA republished it.

Transogram's Green Ghost game originally appeared in 1965 and was touted as, “the luminous game you can play in the dark.”