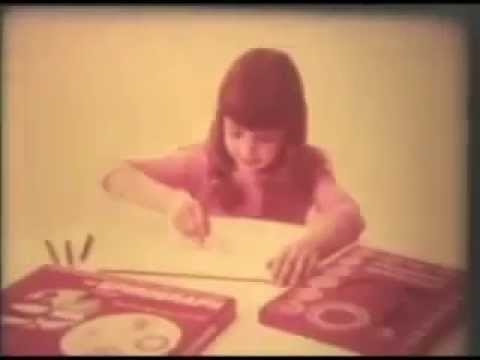 Spiromania is both groovy and musical in this commercial from 1973!

A mashup of educational toy, creative design tool, mathematics lesson, arts-and-crafts project – Spirograph is all of these things and fun to boot. With a shelf-life approaching 50 years, Spirograph’s longevity can be traced to its simplicity and the fact that it taps into a child’s desire to draw and doodle.

Every Spirograph set comes with a variety of plastic shapes with ridged edges, coloured pens, and paper. The player creates a design by placing a smaller shape inside or outside a larger one and using a pen to trace the path of the smaller shape as it rolled alongside the other. Simply changing the starting point and pen colors result in a myriad of different and unique designs.

Despite its apparently random results, the concept behind the toy is rooted in mathematics. The intricate designs it produces are known as epicycles, a mathematical term for the “path that one circle creates as it moves along the interior or exterior of the circumference of another circle.”

Spirograph was the brainchild of Denys Fisher, a mechanical engineer, who originally developed it as a drafting tool in the early 1960s. After encouragement from friends and family, Fisher began to market his drawing set as a toy. A trial run in several UK department stores was parlayed into a successful debut at the Nuremberg International Toy Fair in 1965.

Kenner Products quickly snapped up the licensing rights to Spirograph and begin marketing the toy stateside in 1966. A new drawing technique, “Spirography”, was born. Sales and accolades soon followed. In 1967, The British Association of Toy Retailers named Spirograph its Toy of the Year. At the same time, the toy was topping the best sellers list in the United States for two years in a row. United States Patent #3,230,624, filed January 25, 1966 on behalf of Denys Fisher, illustrates individual design elements of the Spirograph that would allow users to “quickly and easily produce designs or patterns of an epicyclic or like nature upon any suitable material or surface.”

With a hit toy on its hands, Kenner introduced a variety of Spirograph-related offerings to the market, including Super Spirograph (with more gears than the original), Spirotot (aimed at the kindergarten crowd), Magnetic Spirograph (using magnets to hold shapes in place on a page), and a variety of refill sets. In 1968, Kenner’s Spiroman also appeared on the scene. One of my favorite toys, Spiroman was a futuristic figure, complete with “pendulum action” that drew patterns when his hands were pressed to set the pendulum was set in motion.

Spirograph continues to be sold today. Hasbro has marketed a variety of sets over the years. Toy company Kahootz also sells updated versions of the original Spirograph sets, including a deluxe set and travel versions.