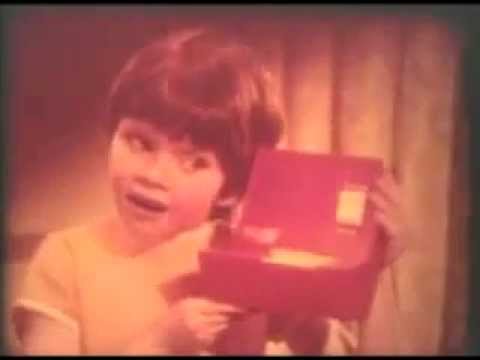 As a child, I was drawn to toys that allowed me to recreate adult activities at my own level. For example, baking an actual cake in my Easy-Bake Oven or engineering a working drawbridge with my Erector Set were both satisfying playtime experiences. Kenner’s Say It! Play It! also gave me that satisfaction.

Released in 1968, Say It! Play It! is a working cartridge tape recorder that allows players to “capture the wonderful world of sound and play it back.” They toy ran on three regular “D” size batteries (remember them?). Say It! Play It! came equipped with two tape cartridges of varying lengths. The cartridge with the smaller spool of tape recorded for about 30 seconds while the other cartridge upped the time to one minute.

In typical Kenner fashion, the operation of Say It! Play It! was very easy. Sliding one of the cartridges into the red base automatically turns on the player and rolls the tape. Pushing the large white switch down to “Record” records as you to talk directly into the built-in speaker. When you’re finished recording, flipping the switch up to “Playback” lets you listen to your audio masterpiece.

Similar to 8-Track tapes, Say It! Play It! cartridges were continuous and didn’t require rewinding. This feature added a welcome level of kid-friendliness for the preteen set. In the event a cartridge was lost or accidentally damaged, Kenner sold additional Say It! Play It! tape cartridges along with the toy.

Kenner’s Movie Viewer was used to feature a variety of the company’s licensed properties, including Snoopy, The Six Million Dollar Man, The Bionic Woman, Star Wars and the movie Alien.

Payday from Parker Brothers challenges players to make it through a month of bills, financial pitfalls, and monetary gains to be the player with the most cash at the end of the month.