I have fond childhood memories of enjoying drive-in movies in the back of the family station wagon – thus, the Movieland Drive-In Theater playset has great appeal for me. Released in 1959, it was one of the earliest toys released by New Jersey-based Remco Industries.

Remco (an acronym drawn from the words Remote and Control) has remained a favorite collectible brand for its vast array of vehicles and licensed toys from the 1960s, including pop-culture faves like Star Trek, Lost in Space, the Beatles, and the Munsters. 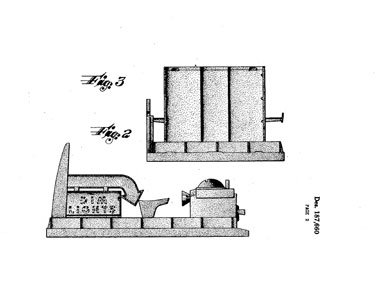 The design of the Movieland Drive-In Theater was unique enough that Ike Heller and Saul Robbins, Remco’s two original founders, applied for an ornamental design patent for the toy. United States Patent #187,660, filed September 14, 1941 illustrates perspective and elevational views of the drive-in.

The focal point of Remco’s miniature open-air theater is a filmstrip projector, powered by two D batteries, that is dressed up as a projection booth. The booth uses a standard flashlight bulb to project a movie onto a 4″ x 6″ screen. Remco provided 6 films with the toy, all filmstrips in black and white that featured popular characters and TV shows from the time period. This list included Heckle and Jeckle, Mighty Mouse, and Captain Kangaroo. A circular knob attached to the projector is slowly turned to change the onscreen images. 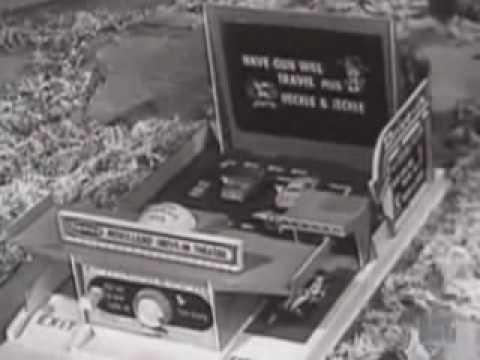 Part of the fun in the toy lies in the attention to detail that Remco paid to replicate a realistic drive-in movie experience. In addition to film selection, the playset came with a set of six miniature tin cars that can be driven into the theater and parked in designated spots in the parking lot. A marquee was also provided to hang one of three “coming attractions” posters.

You can see the Movieland Drive-In Theater in action in this commercial that features a young Patty Duke.

In 1977, TOMY released the Tutor Typer, an educational toy designed to help children, ages 3 to 8, learn to spell, count, and use a keyboard.