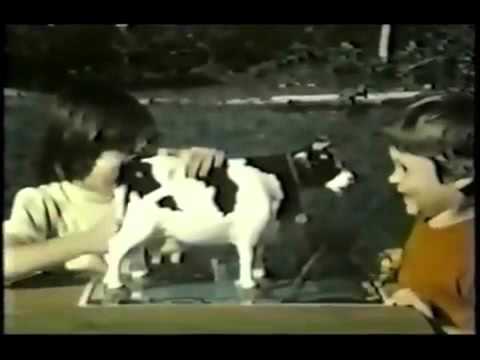 Milky, the Marvelous Milking Cow, stands as one of quirkiest entries in the Kenner Products toy line. I’ve often wondered if this toy was influenced by Kenner’s 1967 acquisition by General Mills, a multi-national food and drink manufacturer. Or perhaps it was the result of an alcohol-infused planning session.

Released in 1977, Milky the plastic cow stood roughly 10.5-inches tall, could drink water, and produced “pretend milk” when one of her rubber udders was squeezed. By gently pumping her tail up and down, a child could coax the bovine to drink water from her translucent trough. Once she had her fill of H2O, Milky would raise her head and say “moo” to indicate that she’s ready for milking. Non-toxic milk tablets placed in her udder dissolved in the water and gave it the appearance of extra-skim milk.

The entire package was rounded out with a variety of accessories, including a vinyl pasture mat, a cow bell, extra milk tablets, and a booklet that tells the story of “how milk gets from the cow to home” (spoiler alert: it doesn’t involve non-toxic milk tablets!).

Outside of providing kids with a glimpse into the life of a dairy farmer, Milky offered limited play value. After the novelty wore off, the public eventually soured (pun intended) on the toy and Kenner put Milky out to pasture soon after she was released.

Bubble-based toys were some of Kenner Products' earliest sales successes. One of its most popular offerings, the Bubble-Matic, was a plastic gun (available in red or blue) that shot bubbles with every squeeze of its trigger.