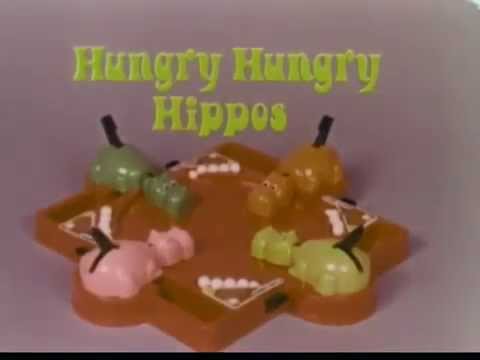 Dubbed “the frantic marble munching game,” Hungry Hungry Hippos has been entertaining children for nearly four decades. First released in 1978 by Milton Bradley, the game was imported stateside from Japan by toy inventor Fred Kroll (who is also known for creating the game Trouble).

Like many classic games that have stood the test of time, Hungry Hungry Hippos has a simple objective. The game is won by the player whose hippo gobbles up the most marbles.

Each player chooses one of the four hippos that are attached to the edges of the game. The action involves feverishly pressing down on a lever on the back of the hippo, which extends the hippo’s head and opens its mouth, allowing it to compete to capture marbles from the 20 that are released onto the game’s surface. Once all the marbles have been eaten, the player with the most marbles is declared the winner.

In the original release of the game, each hippo had a distinct name and color: Lizzie Hippo (purple), Henry Hippo (orange), Homer Hippo (green), and Harry Hippo (yellow). Over the years, a variety of updates have been made to the game: the names and colors of the hippos have changed, the marbles are no longer white, and the game board has been modified.