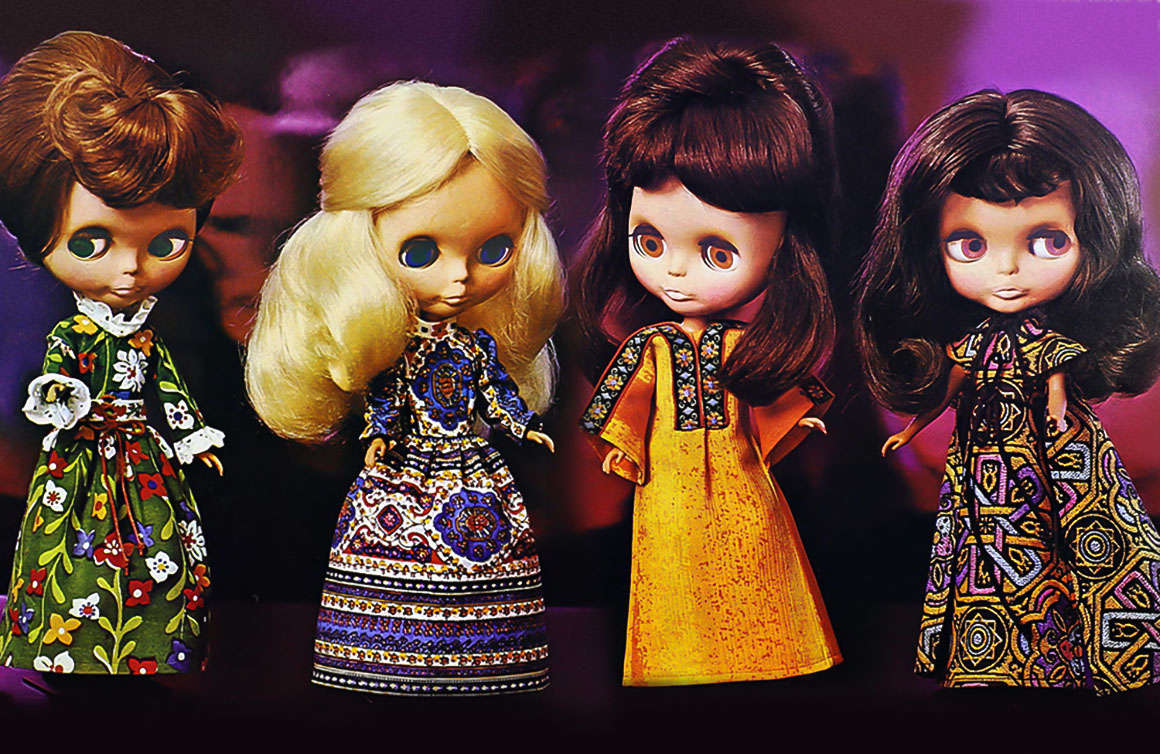 Released in 1972 by Kenner, Blythe was a line of fashion dolls and accessories created by Allison Katzman, a toy designer at Marvin Glass and Associates.

Intended as a competitor to Mattel’s Barbie fashion doll and inspired by Betty Boop, Blythe (all four dolls in the line had the same name) stood 11-inches tall and featured an oversized head with large eyes and luxurious eyelashes. Blythe’s eyes were centre-stage: an O-ring attached to a string located on the back of the doll’s head could be pulled to trigger a mechanism causing Blythe’s eyes to blink. With each blink, the doll’s eyes changed expression and colour, from brown to green, purple, and blue.

In a 2013 interview, Katzman shared that the changing eye colour feature was inspired by her daughter’s mishap at an optometry lab, which inadvertently gave her the wrong colour of contact lenses.

Styled and sold in four different options, the dolls were posed in cardboard boxes with large window display packaging. Similar to Barbie, a line of colourful outfits were sold separately.

Blythe was not an immediate hit and Kenner pulled the dolls off the market after just one year — but the story doesn’t end there. The doll has achieved cult status thanks to legions of modern-day fans of the vintage doll. Today, original Blythe dolls are highly coveted and command price upwards of $1,000 US, with some sellers asking for more than $2,000 US. That’s an impressive appreciation over Kenner’s original $25 price tag. Blythe enthusiasts also create customized versions of the dolls and fashion entirely new accessories for it. Blythe is even the subject of photography, craft, and art books.

In 2001, Japanese manufacturer, Takara and Cross World Connections, purchased the rights to Blythe from Hasbro (current owner of the doll’s intellectual properties) to produce an updated line. Hundreds of Blythes have since been produced in several sizes and with a variety of features not found in the original line.

Watch a vintage commercial for Blythe on the Toy Tales YouTube channel.

Released in 1978 from Tomy, Fashion Plates allowed budding fashionistas to design their next line of haute couture for the catwalk aka the family bulletin board or refrigerator.

A mashup of educational toy, creative design tool, mathematics lesson, arts & crafts project – Spirograph is all of these things and fun to boot. With a shelf-life approaching 50 years, Spirograph’s longevity can be traced to its simplicity and the fact that it taps into a child’s desire to draw and doodle.